When the dejected Hamlet debates the rival claims of 'a weary life' and the 'sleep of death' in his most celebrated soliloquy, he argues that fear prevents us from terminating mortal existence. The prospect of dreams without limit is terrifying, for

the dread of something after death,

The undiscovered country, from whose bourn

No traveller returns, puzzles the will,

And makes us rather bear those ills we have,

Than fly to others that we know not of.

His trepidation is understandable enough, and yet the whole notion of an unconfined dream-state can be a central stimulus for artists. Far from shunning 'the undiscovered country', they often seek to define it in images that offer a compelling alternative to more literal and predictable representations of reality. The materials they employ, no less than the visions they develop, have never been more various than they are today. Even within the beleaguered activity of painting, challenged on all sides by the burgeoning of new visual media, a multiplicity of distinctive strategies are still available to those best able to replenish and extend the language of art. Many of these diverse approaches can be found in the prizewinning submissions for the 1999 John Moores exhibition, an indispensable event for anyone eager to take the pulse of British painting at the century's end.

A related bareness and disjunction can be found in Christopher Cook's Changing the Need. like Raedecker, he is prepared to experiment with unorthodox combinations of media. In this case, aluminium becomes the support and oil pigment is mixed with resin and graphite. So a material traditionally associated with drawing is now deployed as a crucial component in painting. Cook has invented a pouring technique for his graphite. But the outcome is far removed from Jackson Pollock's splashiness. Changing the Need is executed in a highly controlled manner. Spareness is paramount, and the prevailing mood has an arid quality reminiscent of Mirage. For all its austerity, though, Cook's painting is stubbornly optimistic. In earlier works like After the Storm or Sourland he indulged in a more sensuous use of colour and brushwork, but they seem more apocalyptic than Changing the Need. Now the landscape is dominated by a conduit pipe which, rather than despoiling nature, courses with energy and generates hope. Even the minuscule butterflies, so often a symbol of transience and mortality in vanitas paintings from the past, underline the prospect of metamorphosis. Changing the Need is an image held in suspense, enigmatic and yet at the same time charged with the expectation of imminent renewal. 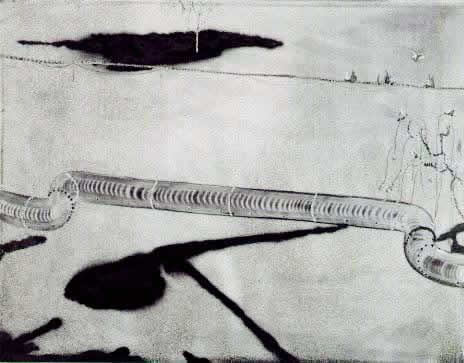