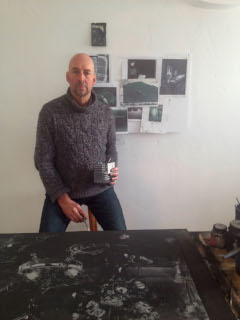 Christopher Cook was born in North Yorkshire, England. He studied English Literature and Fine Art at the University of Exeter, UK, publishing his first collection of poems in 1983. He took an MA Painting at the Royal College of Art, London, during which time he was given his first major solo show at Camden Arts Centre.

He then spent three years in Bologna as Italian Government scholar, and was included in the exhibitions Eros in Albion at the Casa Masaccio and From Bacon to Now at the Palazzo Vecchio, Florence. Between 1991-94 he was Guest Artist at the Stadelschule in Frankfurt, Germany, Visiting Fellow to the Ruskin School, University of Oxford, and spent a year as Distinguished Visiting Artist to CalState University Long Beach, when he exhibited in the UK/LA festival. In the same year, he represented the UK at the Cagnes Painting Biennale, France and also in the European Union exhibition in Bangkok.

In the mid-nineties, three extended research visits to India led to a rethink of his work, from which the monochrome graphite process emerged whilst working in a studio in Porthleven, Cornwall. An early graphite was a prizewinner at John Moores XXI.

In 1998 he was appointed Reader in Painting at the University of Plymouth. Following publication of his selected poems For and Against Nature in 2000, he travelled on a AHRC award to Bundanon Trust Australia, and later that year began a two-year Arts Council of England residency at the Eden Project in Cornwall (UK), where some of the larger graphite works relating to genetics and self-organising systems began, along with material for his artist's book a thoroughbred golden calf.

A major survey show of the graphite images, supported by the British Council, toured three venues in the USA in 2004, including the first of five solo shows with Mary Ryan Gallery New York (now Ryan Lee). An AHRC/Daiwa funded residency accompanied his solo show at Yokohama Museum of Art in 2005, the exhibition transferring to Today Art Museum Beijing the following year. Previously coincidental connections to Eastern aesthetics and visual traditions became more developed during this period.

In 2012 he was awarded a Bogliasco Foundation Scholarship (Italy) where he developed a series of smaller improvised landscapes provoked by Eastern notational techniques, later exhibited at Art First London, where they were accompanied by a new publication Stanzas after Hokusai.

In 2016 Cook initiated a new series of images taking the 17th Dutch Still Life tradition as their starting point. One of the first of these to be exhibited was awarded the Valeria Sykes first prize at the New Light Biennale, which opened at the Bowes Museum in 2017.

Please email the artist if you wish to to receive an invitation to future exhibitions :